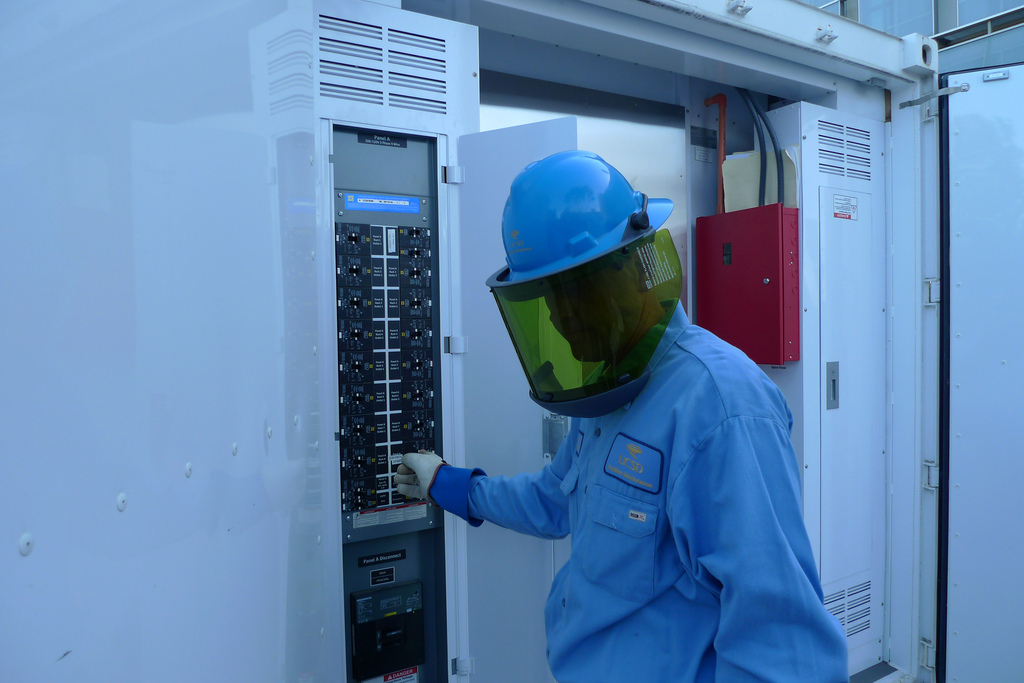 (From the California Institute for Telecommunications and Information Technology)

San Diego, Aug. 24, 2010 -- A consortium of researchers from the public and private sectors have embarked on a real-world experiment to gauge whether large computing facilities can operate on less power if they cut alternating current (AC) out of the equation.

At the University of California, San Diego today, engineers switched a set of servers in a campus data center to operate continuously on 380-volt direct current (DC) – as part of a project that allows researchers to track in great detail the energy savings that servers and data centers can hope to achieve through a variety of architectural and procedural efficiencies, including the use of DC power.

The experiment at UC San Diego is part of Project GreenLight, a National Science Foundation-funded initiative that has deployed a modular data center on campus with sensors and other instruments to measure the energy efficiency of information and communication technologies – and to help researchers build greener IT systems and software.

“The UC San Diego campus has made substantial investments for energy savings,” said Thomas A. DeFanti, principal investigator on Project GreenLight and a senior research scientist in the California Institute for Telecommunications and Information Technology (Calit2). “The switch to DC powering of servers holds great potential on a campus where supercomputers and other high-tech facilities represent a disproportionately large share of energy consumption.”

It is estimated that companies could save billions of dollars each year in capital costs and ongoing energy savings by using all-DC distribution in their data centers.

In a traditional server facility AC power is provided at a high voltage and converted to DC in the UPS system to charge batteries and condition the power. From there it is converted back to AC to drive the power supplies of computing equipment to run CPU, memory, disks, and communications components. Skipping or consolidating the above conversion steps can save considerable electricity usage overall in the power distribution chain and in cooling.

In 2006, a temporary installation, utilizing best-in-class equipment, was slightly modified to prove that further research was merited. In cooperation with Berkeley Lab and others, Direct Power Technologies, Inc. provided both equipment and design assistance. The UC San Diego project has now installed first-generation 380 VDC equipment specifically manufactured to enable this technology to evolve to the next level of commercial availability.

The researchers hope to prove that switching to an all-DC power distribution should increase the ‘computing work per watt’ – a key barometer of energy efficiency in computing environments. In addition to significant energy savings, other potential benefits include improved power quality, reduced cooling needs, higher equipment densities, reduced heat-related failures, improved reliability (from fewer components) and ease of use of renewable sources of DC power. The DC power researchers also point out that the industry has the opportunity to make this a worldwide standard through the ongoing collaborative efforts.

The server functionality in this dual AC and DC power supply model is independent of ultimate power source, whether it be AC, DC, fossil fuel or renewable energy. Each system is capable of operating in both AC-DC and DC-DC power modes via separate power feeds. By switching two breakers, operators can change the mode of operation from AC to DC.

“The coupling of renewable energy systems that generate DC power with large consumers of DC is the wave of the future for energy efficiency,” said Byron Washom, director of strategic energy initiatives at UC San Diego. “Our contracted 2.8 MW fuel cell that utilizes renewable methane gas will only occupy the land area of a tennis court, yet it produces more DC power than that required by the San Diego Supercomputer Center.”

“The DC power project is the first proof-of-concept step towards a larger project that would include renewable energy resources as they become available here at UC San Diego,” said Greg Hidley, a technical director with Project GreenLight. “We envision at the very least the addition of existing campus photovoltaic power and ideally power from the future UCSD fuel cell as well.”

The DC-DC experiment will provide a fully instrumented environment to measure the achievable efficiencies when using DC power at the server, rack and data center levels – and to compare those efficiencies to the energy profile of GreenLight’s existing AC-DC instrument racks. According to Berkeley Lab’s Tschudi, the overall system efficiency of AC systems in data centers is lower, whereas a DC-based powering architecture results in better system efficiency by reducing the number of AC-DC conversions. In the future, further efficiency gains are possible by directly powering variable speed fans, pumps and chillers with DC along with lighting systems. These devices operate on DC today, so the transition to DC would be relatively straightforward.

Many industrial partners cooperated to support this experiment, which is one of the first in the United States using components specifically manufactured for this 380VDC power topology.